I awoke in the morning at Ten Mile River Shelter, excited at the fact that I had arrived in New England. The forests here are already changing, as more pine and moss overtake the vines of the southern Appalachians.
I would learn later that a man was found dead near this shelter the night after I stayed. He was discovered in his tent by a hiker. I don't recall a tent there the night I was at the shelter, so I assume he arrived after I had left... Either way, a tragedy and an unfortunate moment for the hiker who found him.
The trail followed along a river for some time, proving to be about as easy as the A.T. ever gets. After crossing a road, I took back to climbing hills, and at one lookout, I stood on Native American reservation land, the only time the trail crosses such.
I was excited to learn that some friends would be coming to visit me in Kent. They weren't going to arrive until late in the day, so I talked to another hiker, Whitewater, and we agreed to split a room at The Fife 'n Drum Inn.
Showered, I went to the laundromat to throw my laundry in with some other hikers. While there, I ran into Dundee, and hung out with him for a while. I told him he was welcome to spend the night in our room, and he took us up on the offer.
Once my friends arrived, we all hung out in the Inn for a while, sharing stories and laughs, and then we walked to the restaurant for dinner. It was a great time, I enjoyed delicious food and great company.
The old man whom owned both the inn and restaurant arrived that eve, and played some beautiful piano music. He used to play professionally, and even played with Frank Sinatra. He had dreamed of owning a fine restaurant in which he could come and play his piano, and it was nice to see he had lived out his dream. I shook his hand and thanked the old man before leaving.
It was late, so I said goodbye to my friends and retired myself. It is always sad to say goodbye to a familiar face, since I typically walk alone, and camp with strangers. But I hope to see them again someday, as with my other friends; I have been thinking a lot of how I would like to spend more time with people, and do better at keeping in contact... I am lucky to have met so many wonderful people throughout life.
The following morning, Whitewater informed us he would be taking a few days off, so Dundee and I ate some breakfast and walked back to the trail.
We walked together for the day, and I enjoyed the company. Dundee is a pretty cool guy, with a good sense of humor. We camped at Pine Swamp Brook, and walked together the following day. We did some good miles, which was pretty impressive considering a very extended break we took midday.
We had arrived, in mid afternoon heat, to "Great Falls". It was a beautiful waterfall. What started as an exploration, with us climbing the falls and checking out the scenery, quickly turned to swimming and fun. We stood beneath the falls, climbed and jumped in the water, and then sat and enjoyed the warm sun.
We swung into Salisbury to resupply, and I needed fuel. I have to say, I felt a little out of place in these Connecticut towns, walking in, sweaty and dirty, when everyone around were clearly wealthy and well off.
I walked into the grocery store, to find Dundee holding a huge chocolate cake, and wearing a large smile. Needless to say, we demolished that cake for lunch.
That night, we slept in Riga Shelter, opting not to tent because the eastern view from the shelter was nice, and I looked forward to the sunrise.
The morning ended up being cloudy, and I missed my desired sunrise view unfortunately. It was a nice morning nonetheless.
I climbed Bear Mountain, the highest peak in the state, and a mile later on the descent, I crossed into Massachusetts. I was excited, as I always am at a milestone! Another state completed!
Being a former resident, I looked forward to hiking some familiar ground. I was anticipating some of the interesting places to stay in the coming days. This trail has been so exciting, and I was eager to see what I would find around the next bend. 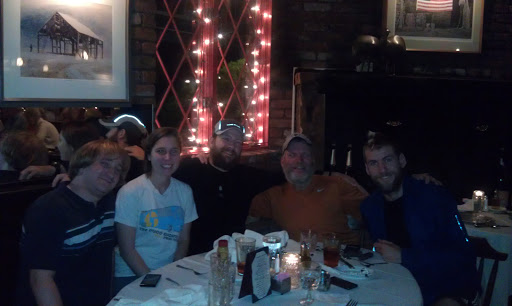 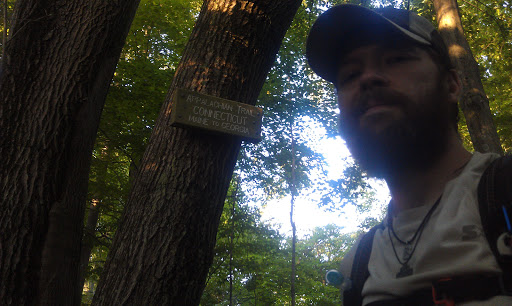 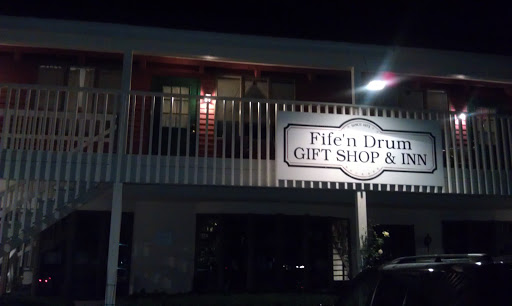 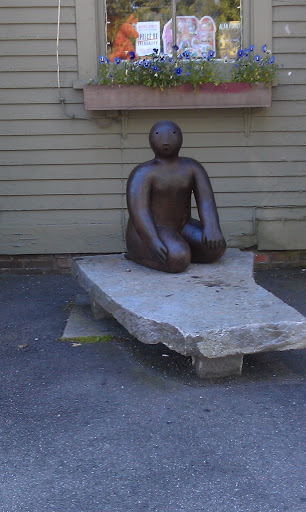 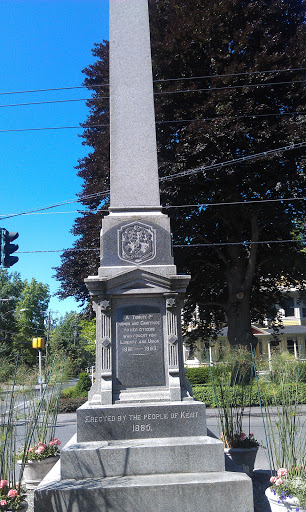 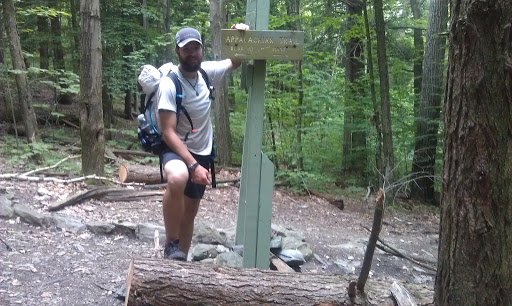 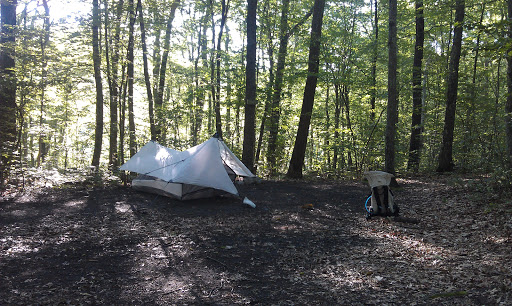 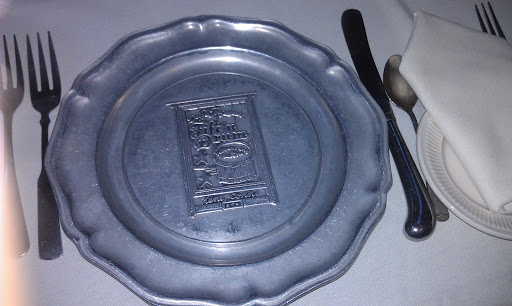